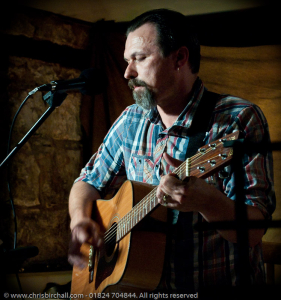 So… it may well have been too cloudy to observe the annual Perseid meteor shower at its peak last night but the stars certainly shone brightly for our weekly Singers’ Night at The Feathers.

Sixteen of them, in fact, plus the same number again in the audience making for another excellent night of music.

And they came from all corners of the Galaxy. From planet Rhos-on-Sea we had Tom and Lynda. It was good to see Tom back after suffering a chest infection and he was on top form as he accompanied Lynda on a musical journey that took in The Northern Plains and All the Gold in California.

Also from down the coast were Richard and Wendy.  Richard opened their set with My Best Friend.  Then his best friend Wendy treated us to another lovely Edwina Hayes number, Run, and the 1950s Patty Page classic Tennessee Waltz.

Rocketing in from Wrexham came Peter Leslie whose excellent set included Nothing To Show For It At All by Kieran Halpin and Sandy Denny’s Who Knows Where the Time Goes (popularised by Fairport Convention).

“There is a road, no simple highway” …and it leads from Leeswood to Ruthin. Colin took that route and sang us those very words in a fine rendition of the Grateful Dead song Ripple from the pen of Jerry Garcia.

Just a hop, skip and a jump away at Denbigh was Glyn, Bob and Penni’s launch pad. Glyn sang about The Leaving of Liverpool and had us all joining in with the  chorus of the comedy song Na Na Nooton Nya Nya.

Bob went all Kenny Rogers on us with Ruby, and Penni went all Ryan Adams with Sweet Carolina before singing the lovely Pete Townsend song Behind Blue Eyes.

The natives of Ruthin were out in force too. Chris opened the evening with Whiskey in the Jar and Sweet Child of Mine (plus the odd corny joke). Ros talked of jumping off the Tallahatchie Bridge in her Ode to Billie Joe and John resurrected Elvis with Mystery Train. 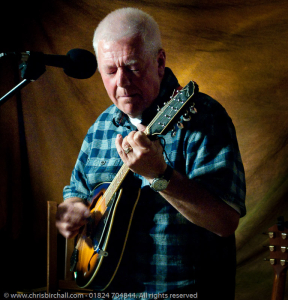 here were two home grown Phils.  Phil Johnstone was finger-pickin’ perfect with his Time in a bottle and By the Time I Get to Phoenix. Then Phil Townson dusted off his mandolin to perform a self penned sea shanty Lies That Pack (with a distinct rock ‘n roll attitude) and then swapped back to his guitar for Baby I’m Your Loving Man.

Tom, Dick and Harry came back on stage for the finale spot.  During the evening we’d had some 12 bar country blues from Richard with Corina Corina and Gillian Welch’s ‘Annabelle‘ from Harry and they sent us all home, feet a-tapping to Walking Cane” and Memphis Tennessee.

Music, Cake and Candlelight Thirteen on the Stage