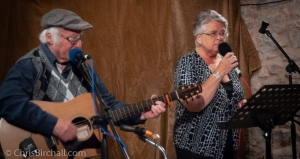 There were no pagan rituals, or dancing around a neolithic ring of standing stones, but what we had instead was a circle of friends gathered in The Feathers to celebrate the joy of music.

That said, Tom Degney did “Shimmy like his sister Kate”.

Then Lynda went into Don Williams mode with “Don’t You Believe”, and I served up a slice of Bread in the form of “Guitar Man”. 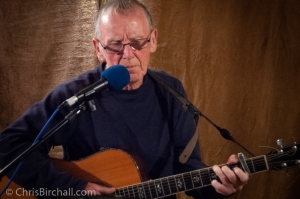 Bob Neale morphed into Bob Dylan with “One Too Many Mornings”, and Richard Eastwood informed us that “Roses are Red” in the style of the 1962 Bobby Vinton hit.

Wendy Eastwood then joined her husband for the Alison Krauss/Don Williams duet, “Lay Down Beside Me”.

And so a very pleasant evening, in which we had the rare opportunity to perform five songs each, was brought to a close by Penni Neale. And she took us from the first day of summer straight into Autumn with a beautiful rendition of the song that has become something of an anthem for Ruthin AllStyles. Every time I hear “Autumn Leaves” I can’t help thinking of the late Bryn Roberts. It was one of his favourite songs. (Click ► below to listen)

Next Thursday is our Festival Week Singers’ Night, when in the second half of the evening we will be showcasing four of Ruthin’s musical acts: Fuchsia Jones, Breeze, Ceidwad y Gan, and the Tom, Dick and Harry Band.