Take me to the Mardi Gras 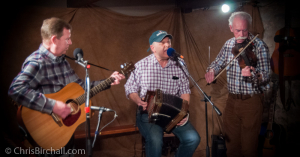 When I was searching out something new to sing a couple of days earlier, I’d plumped for Paul Simon’s “Something So Right”. Had I known how the evening was going to go, however, I might have chosen instead, to learn the track that precedes it on the “There Goes Rhymin’ Simon” album, Because as it turned out, “Take Me To The Mardi Gras” would have been the perfect song to follow this week’s opening act.

Making an impromptu first visit to Ruthin AllStyles Music Club, the Liverpool based Cottonmouth Cajun Band got the evening off to a rip-roaring start by taking us slap-bang into the heart of New Orleans’ French Quarter. It was a bright lively set. Full of fun. In fact all that was missing were scantily clad dancing girls with plumage and bright vibrant colours. 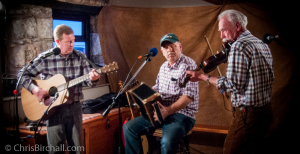 According to accordionist Ronnie Farrell (good tongue-twister there) the playing of Mardi Gras music outside of New Orleans and outside of the festival’s fortnight in February is frowned upon (oh, another one!). We promised not to tell, so long as they promised to pay us another visit.

Next up it was Richard with “Hobo’s Lullaby”, Tom Degney with “Blue Ridge Mountains” and Lynda with “Cattle Call”.

Robin went all Dylan on us with “Don’t Think Twice” and then he beckoned Enid to join him. She didn’t think twice and before you know they were well in to Leonard Cohen’s “Hallelujah”.

Joe Lyon was in a Billy Fury frame of mind with “Once Upon a Dream” and “Never Find Another You”. 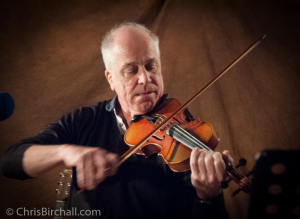 Penny Neal was on top form with “Truth of a Woman”. Then Glyn gave us the classic folk song “Gypsy Rover”.

Mike Whittaker sang two of his own songs “Call Me I’m Here” and (by request) “Love is Everything”.

Jim was back after an absence of several weeks whist waiting for his finger tip to heal after having it stitched back on following a gardening accident. That he got through two fine Scottish jigs on his trusty fiddle, was testament to the surgeon’s skill. 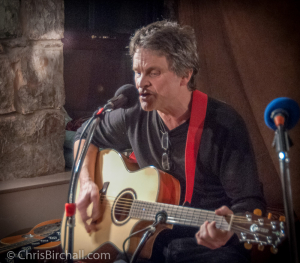 And on the subject of digits, it was good to see Gary ‘the Toes’ back at the club again for the first time since we moved to The Feathers. He sang “My Old Friend The Blues” and Neil Young’s “Old Man”.

John and Ros paid tribute to Victoria Wood, who had sadly passed away just the day before, by including the very funny “Ballad of Barry and Freda” in their set.

This week’s ‘Long Distance Award’ goes to David and Sue who hail from Leicestershire. They had been working in the vicinity and dropped in to perform for us. Their set included the Leonard Cohen classic “Dance Me To The End Of Love” and Procol Harum’s “Salty Dog”. 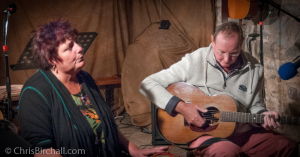 And to round things off,  we finished this fine and varied evening of music in the same way it started – with the Cottonmouth Cajun Band. And for the finale spot, the Merseyside trio did a couple of bluesy numbers, ending with “Pine Rose Blues”.

A huge thanks to all nineteen performers, the ‘new faces’ and the regulars alike, for a brilliant evening of music.

Our Own Transatlantic Session A fine set from John Williams