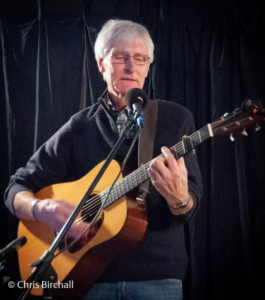 There was no big match on in the main bar this week but there was plenty of team spirit as we fielded eleven players, united in one cause …to put on a great evening of music in the function room of The Feathers.

When you add a dozen or so audience members, the room was sufficiently filled to provide a really nice atmosphere.

Since moving our home ground to The Feathers four years ago (pretty much to the day), we have seen the average audience numbers grow and although this week’s attendance was just about half the room’s maximum (seated) capacity, it’s easy to forget that with the same number in our previous venue, every seat would have been taken. 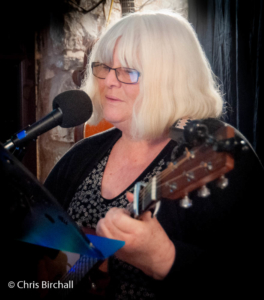 It’s also nice, once in a while, to have fewer performers, because having around a dozen or so means everybody gets to do an extra spot in the second half of the evening.

The “running order” app on my tablet contains an astonishing 120 names of people who have performed at the club since we started using that system two years ago. My biggest nightmare would be if they all decided to turn up for a floor spot on the same night!

As for this week, it was nice and relaxed with the usual eclectic mix of styles and genres that make Ruthin AllStyles so much more than just a folk club. That said, we did have somewhat of a Ryan Adams fest with four super songs from Alan, including the lovely “La Cienega Just Smiled”  as he opened both halves of an evening which ended with Penni Neal’s fabulous version of Adams’s 2011 hit “Dirty Rain”.