The Answer My Friend is Blowing in the Wind 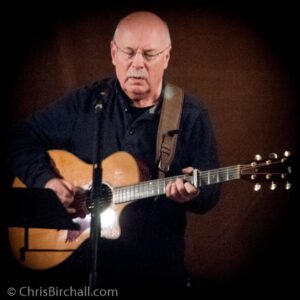 Whilst everyone else was out repairing fence panels, rebuilding greenhouses and retrieving trampolines from three streets away, along with any grandchildren who might have been booked on the same flight, eighteen of us enjoyed a cosy evening of music at The Feathers.

It’s not often you hear “Doris Day” being mentioned at a folk and acoustic club, but she, or rather it, was the main topic of conversation. Anyway all those present had survived unscathed, and we certainly hope all the rest of you did too. Nobody got hit by a falling tree, touch wood! 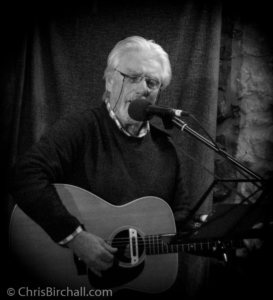 Hey. Enough of the wind puns. A dozen performers put their lungs to good use and performed a fine program of songs with the diversity and variety the makes Ruthin AllStyles Singers’ Nights so entertaining.

Tom, Dick and Harry kicked things off in grand style with a set that included Steve Earle’s “My Old Friend the Blues” and Shel Silverstein’s “Sylvia’s Mother”. John Rowell, of course, was ever present on his six string fretless bass.

We kept Tom on his toes by bringing his ‘significant other’, Lynda Degney, to the stage next. One of their songs was a first for them at the club: Mark Knopfler’s “Next Time I’m in Town”. And we still wouldn’t let him sit down as, flying solo, he sang all about the moonlight followed by a Doctor Jazz style medley. 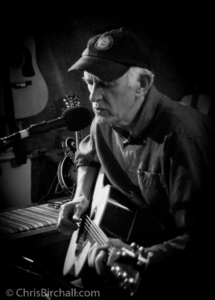 Brian plays the blues exceedingly well, as demonstrated in his cover of Charles Brown’s “Driftin Blues” and the blues standard – one of the first in fact – “Ain’t Nobody’s Business”.

“She Sings in the Valley Below” – Glyn Hudson, that is – and she sang it at the club for us tonight too, along with a little ditty full of Ah dee do, ah dee days, “The Whistling Gypsy”.

Joe Lyon’s sets had a decidedly nocturnal feel with references to dreams and ‘seeing you in them’, and of nights having 1,000 eyes, until dawn eventually broke over “The House of the Rising Sun.

Then that Birchall bloke stepped in to contradict, insisting there “Ain’t No Sunshine” before going all Eagles and Greenday.

Di and Pete entertained us with some Cockney Rebel to take us up to the break, during which wine was won and also the booby prize, in the form of a trilogy of leeks ready for St David’s Day. Glyn seemed almost as happy to have won these, as Lynda was to win the bag of sprouts in January.

We all did another two songs each in the second half until Di and Pete returned to do the finale spot comprising a jaunty medley of French tunes followed by a great song with which to send us on our way, “A Nightingale Sang in Berkeley Square”.

And so off into the night we went. Doris had calmed down, thank goodness. See you all next week.