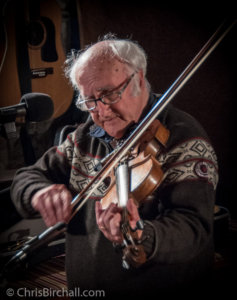 When Tom Degney woke up on Thursday morning he had no idea he’d be singing a song called “Wonder of the World” at Ruthin AllStyles that very evening. Mainly because it hadn’t even been written!

A few words that had been floating around Tom’s head were brought into focus by his morning coffee. He picked up his guitar at 8.00am and an hour later the song, dedicated to his wife Lynda, was done and dusted. And what a lovely ear worm it had turned out to be.

Tom also produced a violin for an instrumental version of “Hard Times, Come Again No More” before accompanying Lynda on guitar for her set which included Wet Wet Wet’s “Love is all Around”.

The evening had begun with some Jim Reeves from Richard Eastwood followed by a fine bit of yodelling from Wendy in the good old country song made famous by LeAnn Rimes, “Cowboy Sweetheart”. 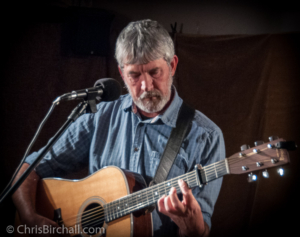 Peter Leslie sang a cracking version of Kieran Halpin’s “Nothing to Show for it All”, James Taylor’s “Something in the Way She Moves” and one of his own – a protest song which he described as ‘a bit of a rant’, entitled “Divided”.

Armed with a ukulele, Glyn gave us “Gypsy Rover”. It was the first time we have seen her playing an instrument at the club – and the girl done good! Then she was joined by Tom on his mandolin for McCartney’s “Mull of Kintyre”. 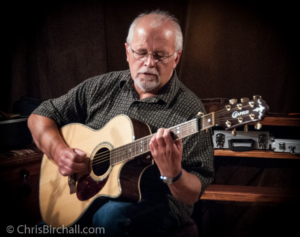 Neil treated us to some lovely finger-style instrumentals as well as providing Enid’s accompaniment for “Lover’s Concerto” and “You Are Always There For Me”.

Bob Neal started with a Kenny Rogers, transitioned to Dylan before making the quantum leap to Max Boyce.  You have to admit, “Duw It’s Hard” to do that! 😉

I had a couple of Tom Waits moments, and Joe Lyons’ musical journey took him through the “Mist Over The Mersey” and all the way down to London’s Berkeley Square to hear that Nightingale Sing. 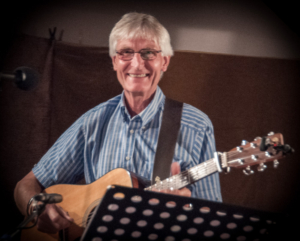 When it came to the Finale Spot it was ‘in for a Penni – in for a pound’. The Denbigh songstress started off as a “Wayfaring Stranger”, went all Dylan with “I Shall Be Released” finishing with a lovely version of Hoagy Carmichael’s “Georgia on my Mind”.

Among the many artists to have recorded this was Willy Nelson, of course, who just happens to be one of Penni Neal’s favourite singers, so when we called for an encore she gave us the song he had written especially for the 1981 film, Honeysuckle Rose, “Angel Flying Too Close to the Ground”. A beautiful song to end a lovely evening.

A Baker’s Dozen, a New Face and a Gaggle of Gremlins Bye Bye Kylie, Hello Breath of Fresh Air