The Gods were smiling on us 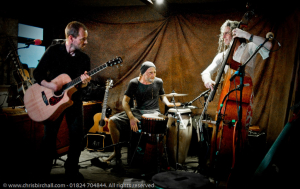 Well we’ve had some great club nights in the twenty weeks since moving to The Feathers, but this one tipped the scales!

It saw our featured act, The Hedge Gods, playing to an enthusiastically appreciative full house, along with floor spots from no fewer than eleven other performers.

To say the Hedge Gods went down well would be a gross understatement. Feet were tapping, hands were clapping and there was even a collective “Yee-Haa” or two during one of the lively country numbers!

Since their first visit to Ruthin AllStyles as a newly formed trio almost three years ago, James, Darren and Will have played 86 gigs and have honed their craft, gelling seamlessly to produce a full, well rounded exciting sound.

Writing all their own material, they describe themselves as “Pulp Fiction meets Tom Waits” and “The future sound of Skiffle”.  In reality they defy categorisation. They are a unique instrumental rhythmic acoustic power trio whose entire style has evolved despite, or perhaps even because of, “musical differences”.

It was hard to pick a favourite from their 40 minute set, but if pressed I’d have to say mine was Wonky Apple Swing.

In addition to all this, they are three really nice lads. They effortlessly engaged with the audience and everyone in the room instantly warmed to them. 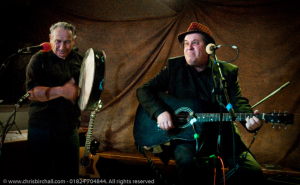 One of the nice things about the way our Showcase Evenings are structured is that the regular members all get to do their quota of floor spots.

There were a couple of new faces this week too. Wrexham duo Tony and Gary perform under the name of TAG. Tonight they treated us to a couple of self penned comedy numbers that had everyone roaring with laughter. The second of these, a shameless adaptation loosely based on Smokie’s Living Next Door to Alice, had us all singing along to the chorus.  This rewrite was about someone called Brian who sees dead people – famous dead people – and was titled Living Next Door to Elvis. It was absolutely hilarious!

There were some super contributions too from Tom & Lynda, Richard, Joe, Chris and Mike Kendrick. 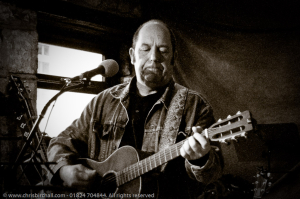 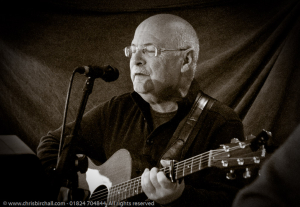 Regular member Harry must have painted a favourable picture of the club because a group of his artist friends turned up to swell the audience. And there was nothing sketchy about his performance as he took to the stage backed by Tom, Richard, John Bass and Enid for a finale set that included Raining in my Heart and the John Legend classic All of Me.

A great ending to a superb evening.