The Music is Stayin’ Alive 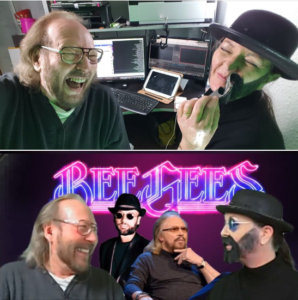 I’ve had to endure years of being impersonated by that BeeGee, Barry, but now we discover that his late brother, Maurice, had been impersonating Jayne. And you have to admit, the resemblance is uncanny!

I must say, it was refreshing, not having to wear a silly hat, so thank you, Jayne, for ‘taking it on the chin’ for team Birchall.

Silliness aside, we had yet another fab music night with songs from forty performers and an audience of up to one hundred at any given time on the Facebook page (subsequent views reaching almost 500) plus 107 Thursday night views here on the website. 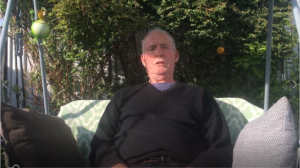 The evening opened with Swinging Geoff Hollis ‘Shining Down on Sennen’ as the sun shone down on his garden. It continued with a whole raft of songs ranging from the likes of Joni Mitchell and Glen Campbell to the Stereophonics and the Foo Fighters; songs from every corner except, as it happened, from the BeeGees.

Midway through the evening our ‘hidden camera’ revealed another episode in the “Lockdown with the Eastwoods” saga. Top marks to Richard and Wendy for the fun and entertainment.

It was good to see John Sellers back, this time with the Rag’n Bone Man song, Human. 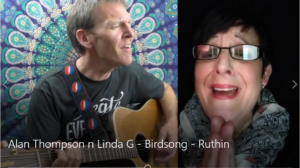 There were, of course, the usual self-penned gems from the likes of Lizzie Pegler and Peter Leslie and, taking us up to the finale, we had the beautiful and moving “Birdsong”, written by Linda Griffiths and Alan Thompson, before Anthony John Clarke and Julia closed the show for us.

A huge thanks to each and every one of you for your songs and for helping to keep our musical community staying very much alive.

May 7th = The CB BeeGees

Posted by Chris Birchall on Thursday, 7 May 2020 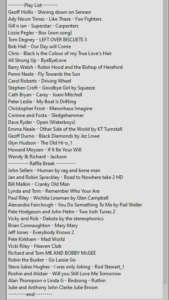