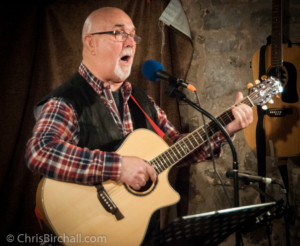 In musical terms, a segue is when one piece or performance blends seamlessly into the next. So when Jim Cole finished his violin recital with “Old Robin Grey”, who better to follow than our favourite old grey busker, Robin Wynne Jones. 🙂

He’s not old of course, he just sings old songs, the first of which was John Denver’s hit from the mid seventies, “Back Home Again” followed by U2’s “Van Demon’s Land” from a decade later.

The play on words is, of course, based on the 1970s music show, “The Old Grey Whistle Test”. This in turn derived its name from a Tin Pan Alley phrase from years before. When they got the first pressing of a new record they would play it to people they called “the old greys” – doormen in grey suits. If these guys approved, the song had passed the test. 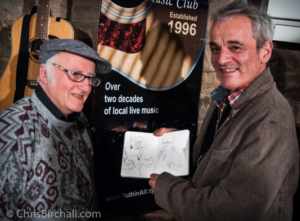 What happened next is a bit sketchy.

By that I mean everyone who performed became immortalised in Mark Gregory’s sketch book.

Mark and his good lady Clare were up from Cornwall on a short holiday in the area and so popped in on our singers’ night. There was no denying the likenesses even on these quick five minute mini masterpieces. 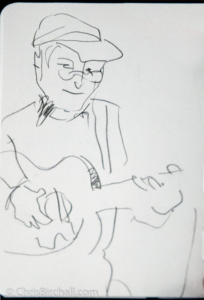 There were some fine songs from John, Ros, Glyn, Joe, Lynda and myself. Lynda had a little help from Tom (on guitar) and Penni asked for “A Little Help From My Friends” before helping Enid Toft sing Amanda McBroom’s “The Rose” in Welsh.

David Reese is someone we’ve seen at the club a time or two recently, but always in the audience. It was nice to see him the other side of the mic for a change. And enjoyably so. He sang “Labelled With Love” and “Railway Hotel”. David, it seems, has been keeping his talents hidden. 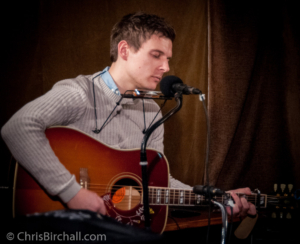 Wrexham brothers Daniel and James MacGregor paid us another visit, treating us to a mixture of their own songs as well as covers from the likes of Damien Rice and Ryan Adams. Daniel’s version of  “Running Up That Hill” transitioned beautifully to an acoustic solo in contrast to the big production sound of the Kate Bush classic.

And for the evening finale, James left us spell-bound by his “Black Sheets of Rain”.