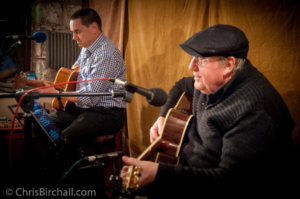 “The snow’s not sticking” they said. “It will have stopped by 6.00pm” they said. The main roads will be fine” they said.

They, of course, being the weather forecasters.

“Don’t believe them” she said.

She, of course, being Jayne.

I, of course, was being over optimistic. Although by half seven, it looked like I might have been right, as Mark Thatcher walked in announcing he’d just driven down the Nant-y-Garth on his way back home to Ruthin. Then two minutes later Neil Martin arrives having driven in over the Clwyd Gate from the other side of Chester.

Then came the realisation that everyone else knew what we didn’t, and that the snow wasn’t going to stop and that the roads were going to be anything but fine.

So Jayne packed up the cakes she had put out for the charity evening and (quite literally) slid off home. But the PA was set up, the room was warm and the beer was wet, so Me, Mark and Neil settled down for what turned out to be a very enjoyable Jam Session.

Here are a few soundbites…

Next Week:
an intimate concert with the amazing and highly entertaining Jon Brindley. [Details]