…and not just any old Tom, Dick and Harry, either, we had the full Tom, Dick & Harry Band in session to give us a taste of the blues, country, folk, soul, rock and bluegrass treats that are to be found on their newly released album “Made by Hand”.

Tom Degney, Richard Davies and Harry Robertson are club regulars of course, as is bassist John Rowell. And it’s always good to welcome the fifth band member Raphael Callaghan, with his armoury of harmonicas. 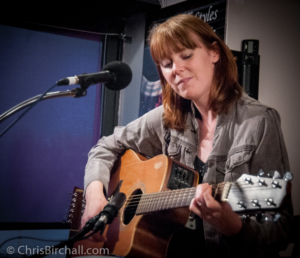 The lads did a stonking mid-evening set, plus a couple of songs at the finale.

But we didn’t let them rest on their laurels. Tom, as always, accompanied his good lady Lynda on guitar, and variously popped up with mandolin and dobro to join with any other performer who wanted a second dimension adding to their spot.

Raphael laid down his harps in favour of the guitar for his solo spot, and John Bass went acoustic to offer up some Lyrical Lindisfarne loveliness. 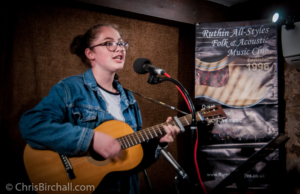 But that wasn’t the end of the story, because in addition to the band, we managed to squeeze no fewer than fourteen other excellent performers into this evening of musical treats.

Young Fuchsia Jones was making her second Ruthin AllStyles appearance, readying herself for a charity gig at the weekend supporting Tom, Dick & Harry at St Mary’s Church in Llanfair DC. She opened her set with “Why’d You Only Call Me When You’re High?” by the Arctic Monkeys, and followed up with the Lana Del Rae song “Video Games”, that had been requested by her proud Dad who was in the audience. 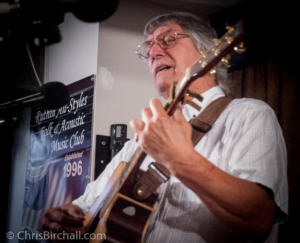 The ‘long-distance award’ went to Geoff Yerrell (right) who was visiting North Wales from his home in West Sussex. It appears Geoff is a seasoned performer on his local folk club circuit, which made the nice things he had to say about our club, all that more special. His first song was “River Run” by the Canadian folk singer-songwriter James Keelaghan, followed by a song about first love, written by his friend Jimmy Lee, called “Lucy Cartwright”. I think it’s fair to say Geoff went down really well and that it was shame we didn’t have time to hear more from him.

In fact, by the time we’d heard from all nineteen performers and musicians, we had overstayed our welcome by almost half an hour. It was time to go, but not before Tom, Dick and Harry reminded us it was the “Dimming of the Day” before bouncing us out of the door at home time to a rousing chorus of “Tulsa Time”.

A Coalition of Merry Music Makers Solstice, Plus One