T’was the Thursday before Christmas

Twas the Thursday before Christmas, when all through the house

Everyone was singing, yes even the mouse.
The songs were sung by the mic with care,
In the hope Christmas tunes soon would be shared.

And so it was, that the Christmas tunes were shared…in abundance!

Ros sang of “Ding Dong Time” and “Santa Baby”, Joe sang of “The Peace of Christmas Time” and “Only a Winter’s Tale”, Gentleman Jim’s fiddle rang out a medley that included Jingling Bells, reindeers with red noses and Santa being snogged under mistletoe, and John became Lennon with the peace lover’s Christmas classic “War is Over”. And yes, you could say “It’s Beginning to Look a Lot Like Christmas”. 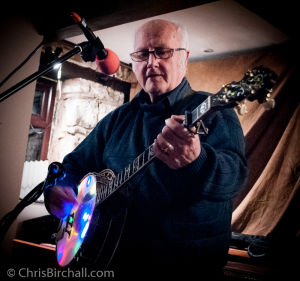 There were songs of love and peace as Mark gave us “Your Song” and “The Glory of Love”, Tom did Tim O’Brien’s “You Are The Sweetest Song I Sing” and broke out his Christmas Banjo for a colourful instrumental, and Mike Whittaker sang two lovely songs, both his own compositions, “No One Could Love Me Like You Do” and “Love is Everything”.

I was feeling “Forever Young”. Never in a month of Christmases did I think I’d be singing the X-Factor winner’s song at a Folk Club. But then… I never expected a great Bob Dylan song would win that dreadful show either! 🙂 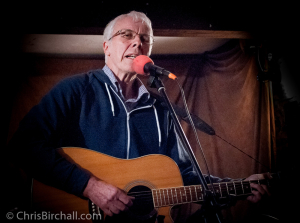 Stephen Croft did a version of “Goodnight Irene”, suitably modified for Christmas at The Feathers, and John Lennon’s “Crippled Inside”. The latter could well describe how Stephen felt at the time due to the fact his daughter hadn’t turned up to hear him.

She and a friend eventually arrived soon after though, so he blagged another floor spot and and sang “Sit Right Down and Write Myself a Letter”. 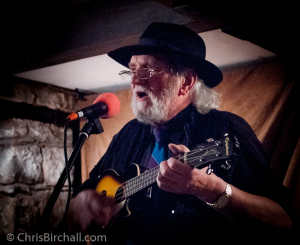 It was good to welcome Colin Masterson back with his electric ukulele as he sang “Never Rains in Southern California” and “When I’m Dead and Gone”.

Then, as the evening was drawing toward its close Penni Neale offered us “One More Cup of Coffee for the Road” which was then sweetened by Richard stirring in a fabulous “Brown Sugar” with Mark Thatcher providing the Keith Richards lead guitar riffs. 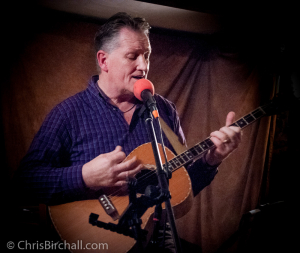 One of the great things about our Singers’ Nights is that you never now who is going to turn up out of the blue. And for this, our last meeting of 2015, I was delighted to see John Williams pop his head around the door.

John performs regularly around the Wirral and Merseyside and is a regular at the Sunday Night sessions of the Wallasey Folk and Acoustic close to where he lives. For this, his second visit since we moved to The Feathers, he’d brought along his sweet sounding tenor guitar and we got him to do the finale spot, in which he included “Green Tree”, “Mistletoe Mile” and a great cover of the Joni Mitchell song “River”.

I’m pleased to say John hinted we’d maybe see more of him in 2016 along with some of the other fine instruments in his armoury.

So all that remains is to wish you all a very Merry Christmas. There is no club for the next two weeks of course and our next Singers’ Night is the 7th of January. In the meantime, check back here for a round-up of the highlights of 2015.