It was a quieter night than usual, with several of our regular couples indulging in candle-lit rendezvous elsewhere, encouraged, no doubt, by an arrow from Cupid’s Bow.

Nevertheless, our music lovers numbered twenty-three, with the performers tallying a perfect ten.

Proceedings began with a couple of numbers by our guest for the evening, Brandon Ridley sporting an authentic Stetson that holds a clue to the Americana influences in his songwriting.

Next up was Joe Lyon, who was turning “A Whiter Shade of Pale” with a rather tasty cover of the sixties Procol Harum hit. Then I borrowed Joe’s six-string to do a topical rendition of Henry Priestman’s  “Valentine’s Day”.

Alan Thompson opened his first set with the Grateful Dead song “Deal”, followed by the first public performance of his latest composition, “Try”.

Another first public airing came in the form of Neil Martin’s “One More Night in Vienna” – or at least the first time it had been heard in its current form. It was one he had written back in 2016 and decided to revisit the song for a facelift and re-write over the last week or so.

The Degneys took “A Walk in the Irish Rain” before venturing up onto “The Northern Plains”, the latter garnering the customary wolf-howl accompaniments from the auditorium.

There was more Americana to come. With Tom Degney riding shotgun on his trusty mandolin, Richard Ruthin took to “The Green Rolling Hills of West Virginia”, the Utah Phillips song made famous by country legend, Emmylou Harris.

We were pleased to welcome a new face to Ruthin AllStyles tonight. It belonged to Rhyl singer-songwriter Lizzie Pegler who sang two excellent self-penned songs, “Trust” and “Roost”.

Taking us up to the mid-evening break, Robin the Busker almost sang about Valentine’s Day with an almost love song in the shape of Rag ‘n Bone Man’s “Skin”.

After the Break
Brandon had joined us to showcase half a dozen songs from his album Mighty Fine, Broke and Free which is due for release on the 22nd of this month and to open the second half of the evening we heard “The Balad of Walt and Jess”, “Take My Blues”, the lovely ballad “Light a Spark”, and the upbeat “Slap the Jukebox”. 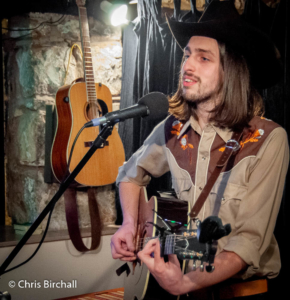 Working closely with the Goat Ropers Rodeo Band, who produced the album, Brandon is also due to appear with them as the support act on the band’s forthcoming tour which will take in London, Bangor, Church Stretton and Edinburgh.

Then, when our floor singers had performed their second set it was over to Brandon the end the evening with a great cover of Bob Dylan’s “Don’t Think Twice” followed by an encore in the form of the Leon Russell song “Hurt Somebody”.

A Brillig Night A taste of things to come