Warm Welcome on a Damp Thursday

With several of our regulars away on holiday, or attending the Conwy Bluegrass and various other festivals, we had no idea what sort of a turn-out to expect.

Then as our start time approached, the heavens opened. Who’s going to turn out on a night like this…?

We needn’t have worried. By 8.30, ten performers had turned up plus another dozen or so who’d come to listen, all dripping wet after their dash from the car park, but ready to enjoy the warm welcome that we always offer at The Feathers. 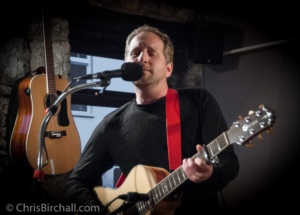 Peter Leslie kicked off the evening with one his original songs, which was aptly named “Relentless Rain”. He also sang “Sea of Clouds”  followed by “Life in the Old Dog Yet” by Dave Wilson of Winter Wilson.

Penny Neal continued the weather report with the Ryan Adams song “Dirty Rain”, after which it became all “Misty” as she sang that lovely Erroll Garner classic, made famous by Johnny Mathis in the sixties.

Then Rockin’ Robin took shelter in “The House of the Rising Sun”, following up with Bob Dylan’s “All Along the Watchtower”.

Chris continued the Dylan theme with “Things Have Changed”, and then changed things with Shel Silverstein’s “Ballad of Lucy Jordan”.

Cath Bryan’s obvious choice was “Obvious Child” by Paul Simon. I don’t know why I said obvious, because Cath’s lovely soft voice is suited to so many different styles as demonstrated in her performance of Imelda May’s “Big Bad Handsome Man”.

“Morningtown”, Steal Away” and “Colour of Kildare” where the three songs Glyn chose for us and as always, prompted a good deal of audience participation.

Mike Whittaker sang two of his own compositions “There are Stories” and “In a Small Cafe” plus a lovely cover of George Harrison’s “Something”.

Master guitar luthier Harry Miller got up – not to sing but to tell us a few stories. Some of them tall but all of them very funny.  I’m sure Harry can play guitar as well as he can build and repair them.  Hopefully one of these days he’ll bring one with him and show us.

It’s always good to see new faces at the club, and this week we were delighted to welcome Rob Brown and Vicky Dowell. Although Vicky had been to our previous venues a time or two in the past, this was the first time at The Feathers and the first time we’d seen them perform as a couple. 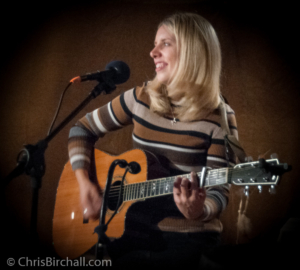 In the first half of the evening we heard them sing Snow Patrol’s “Run” and “Where You Gonna Sleep Tonight” by Amy Macdonald. Then in the finale spot Rob sang Damian Rice’s “Cannonball” and for an encore, Vicky joined him  for another Snow Patrol number, “Chasing Cars”. Splendid stuff.

So the damp Thursday was anything but a damp squib. It was a lovely evening of varied music with everyone doing three songs each and with plenty of banter in between.

Ben and the Baker’s Dozen A Welcomme at The Feathers – with Finnan & Chrimes too!