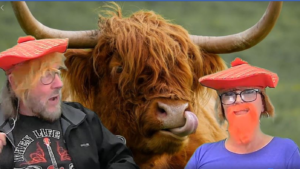 This week we went all tartan and Jayne even grew a bright ginger beard, as we presented the show from the top of a virtual mountain overlooking Lock Ness.

And what a monster of a show it was with Dave Ryder kicking things off with a rather appropriate “Voice in the Wilderness”, followed by a whole gaggle of regulars and with Katie and James of the McGregor clan taking us up to the finale spot.

The finale spot itself was occupied by a Yorkshire-born bonnie lass with a Scottish sounding name. Kate McCullough, who studies music at the University of Chester, sang us a wee gem of a song that she’d found on a Dame Vera Lynn record. And, as if in keeping with the theme of the evening, her Tanglewood Crossroads guitar answers to the name of Whiskey.

There were two other new faces in the form of Jenny Harris-White and Rob Griffiths, and it was nice to welcome Ric Chayney back too.

We were treated to a wide selection of wonderful covers of songs from a diverse range of artists from Dylan to Jim Reeves and from Lennon to Lady Gaga.

And as for our talented songwriters, Peter Leslie gave us the first song he’d ever written back in 1973, whereas Penni Neale has only just written her first, “The Nana Song”. She was nervous about offering it up. She needn’t have been. It was lovely.

So, once again, it was as good an evening of music as you would get any side of Hadrian’s Wall. A massive thank you to all who took part.