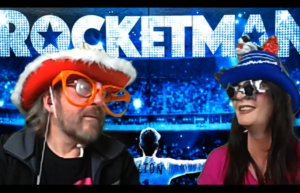 Well, AllStylers, you did it again!

There we were, sitting in Elton’s humble abode. He didn’t turn up but you all did; forty performers and up to a hundred listening/watching at any given time.

At the time of writing the show has had 535 views and it’s gratifying to know that your music is giving pleasure to so many during these strange times, as well and fostering a fabulous feeling of community.

We really are so lucky, having so many talented musicians associated with the club, most of whom were either regular or frequent visitors to our music nights at The Feathers. But it’s also nice to see some new faces from the locality discovering us via the wonderful medium of t’internet.

This week we welcomed Bwlchgwyn duo Rosie and Meri into the fold, as well as Emma Neale, whose mum Penni had been trying to persuade her to come along to the club for ages. 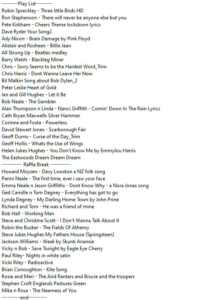 We had Steve and Christine Scott join us again from their ‘lockdown hell’ in Teneriffe, and it was good to see Rhyl’s Mike and Rosa back with us.

Wendy and Richard still haven’t discovered the ‘hidden camera’ and their antics this week were absolutely hilarious.

But the entire evening was just jam-packed with fabulous songs, far too many to mention individually, but just look at the playlist (right) to get an idea.

So hey, let’s do it all over again this Thursday. Join us at 8.10pm on our Facebook page, or here on the website.

Rewind last week’s show. Go 5 minutes in, for the start

Nobody’s Knocking at the Door The Music is Stayin’ Alive