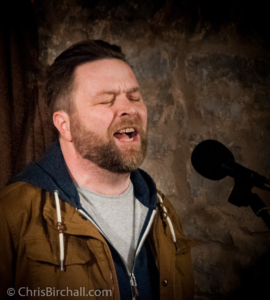 It might sound like it could be the name of a band.  But no: It is apparently what I should have uttered as I awoke on Thursday morning to bring me luck for the rest of the day.

Luckily, I’m not superstitious (touch wood). Although, had I been confronted by a witch, I might have been tempted to throw a pinch of salt at them, swiftly followed by a well-aimed punch!

Anyway, all that first-of-the-month nonsense is just… well… nonsense.

I know this because despite not winning the Wednesday Roll-Over, I had a happy day and was lucky enough to spend Thursday evening in the company of some twenty-nine other lovers of live music in the function room at The Feathers.

Half of these were performers, and it was Penni who got things underway with a lovely version of Simon & Garfunkel’s “Bridge Over Troubled Waters”. Tom Degney gave us a medley of old favourites that included “It’s a Sin to Tell a Lie”, and Lynda insisted that “The Answer is Blowing in the Wind”. 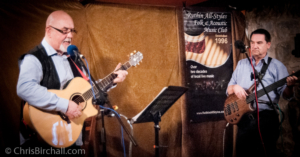 Joe Lyon sang “Woman”, Robin sang “Saved by a Woman”, and then Pete Kirkham gave a fine rendition of Neil Young’s “Old Man” accompanied by his woman, Cath, on guitar.

Cath later included “We Are Young”, by Fun, in a set delivered atop the wobbly chair.

Mark announced that his first song was “Your Song”, which we all know was actually Elton’s song, but nevertheless, he made it his own. Chris sang about “Wild Horses” and Andrew Bowsher dedicated a guitar solo to his one-eyed dog. 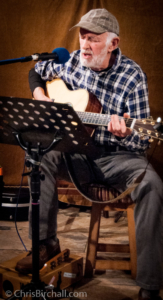 Over the Moon
The previous night sky had featured a Blue Moon, which apparently only happens once in a… (you know what I’m saying). Anyway, it inspired Richard to sing “Blue Moon Turns to Gold”. Then our very own “Mr Blues”, Brian Peters, sang about how the ‘moon peeks over the mountains’ in Clapton’s “Key to the Highway”. This week Brian augmented his fine bluesy guitar style with a well-crafted home-made stomp box.

It was great to welcome back young Brandon Ridley, who sang “Hand me Down” and “T for Texas”. Brandon’s cowboy boots will be transporting him and his stetson to Theatr Clwyd’s next Folk N’ Roots event on March 2nd where he will be in the support slot alongside the Goat Roper Rodeo Band. A gig well worth attending, as I can testify, having seen the same line-up there last year.

New Faces
We always like to see new faces visiting our little club, and this week I was particularly delighted to welcome Wrexham’s John Ramm and Danny Sergiou. At the end of the first half of the evening, the pair delivered a fine set comprising Kris Drever’s “I Didn’t Try Hard Enough”, and the John Mayer song “Belief”. 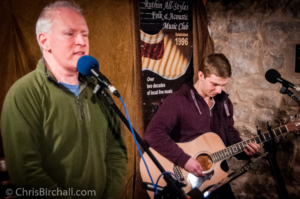 But we couldn’t just leave it at that, so we brought them back on for the finale, when they sang Yellowcard’s “Paper Walls”, before ending the evening with a lovely version of Daniel Bedingfield’s “Wrap My Words Around You”.

All in all it was a fine start to February …and I reckon we should do it all over again next Thursday.